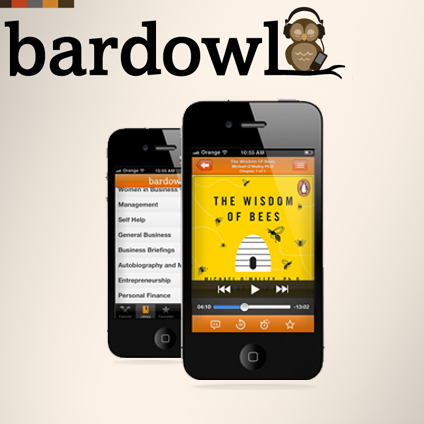 Recently launched British startupBardowl launched its iPhone app earlier in June. Bardowl allows users to stream audiobooks to the device rather than downloads them, however the app also uses local cacheing to store up to three hours of audio on the iPhone to last “a long tube journey or a short flight” for offline use.

A one-off monthly fee will grant subscribers access to Bardowl’s library of titles. Titles at launch include Luke Johnson, Felix Dennis, and Karren Brady, as well as business and management classics from authors such as Stephen J Levitt, Michael Lewis, and John Adair.  Initially available only for iPhone, the company says its app will stream the books “without lengthy download times” and cache content on the handset for brief periods without 3G or Wifi access.

The app  incorporates social media functionality,  built into Bardowl with a feature that makes it easier for people to share what they’re listening to with friends. “Users can extract 30 seconds of narrated audio from a book and share it as a link within messages sent to Twitter, Facebook and LinkedIn.”

Can Bardowl succeed in giving Audible a run for its money – and more importantly bringing audiobooks to an even wider audience?

We think this is an excellent way to increase awareness of the availability of audiobooks alongside their printed and digital counterparts and a way to enable publishing partners to market titles and enter into social conversations with their end customers.