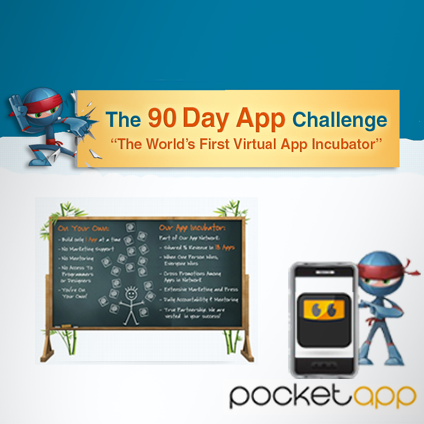 The Pocket App team is set to provide technical support for the 90 Day App Challenge, founded by mentors Amish Shah and James Sol Radina. The founders state that the goals for the program are to teach new developers what it takes to create a successful app, while keeping costs down and taking the guesswork out of the whole process.

“What a lot of new developers who go out on their own unfortunately find out is that they’ve spent tens of thousands of dollars just to get the app built, and they haven’t even done their homework to know if it has a chance to succeed. We’re teaching people how to do things the right way,” says Amish who successfully built the now public Bitzio, Inc., a San Diego based mobile app company.

Developers who graduate also receive a unique partnership opportunity in the form of the 90 Day App Challenge’s App Network. Rather than being forced to go it alone upon completion of the program, each of the 18 developers will become small partners in each other’s apps, acting as advertisers for one another and sharing revenue. This is redefining the way cross promotion app networks are built.

Digital marketing expert James Radina explains the method to this partnership: “Once you’ve built an app, actually getting downloads (and money) is a whole different ball game. Successful app companies have several apps that are used to generate traffic. Most independent developers just don’t have the resources to do something like that—but by partnering all our developers together we have the same effect. When one app succeeds, all the others benefit.”