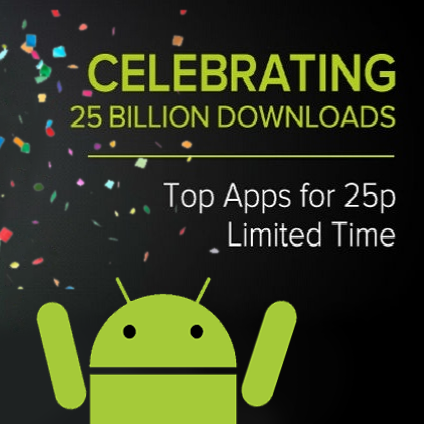 It seems like only yesterday Google had hit the 1 billion apps downloaded from their app store, making their recent announcement of reaching the 25 billion mark quite astonishing.

With an impressive 15 billion apps and games downloaded in the past year alone, Google has every reason to celebrate reaching the 25 billion apps milestone. The Google Play Store is offering big-name apps for just 25p in celebration of hitting 25 billion downloads — less than four years after the app store formerly known as Android Market was launched.

The selection of games and apps available at the celebratory price will rotate each day for five days.  Google play will also be offering special 25 item media collections, such as 25 banned books, 25 albums that changed the world or 25 random things grouped together to fit the theme.

Jamie Rosenberg, the Google’s director of digital content, also paid tribute to all of its users for getting it to this milestone and said, “We look forward to the next 25 billion.”