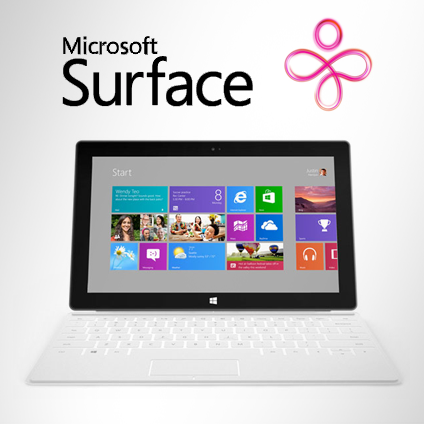 Microsoft has unveiled what it called a “revolutionary” overhaul of its Windows computer software. Windows 8 is a radical makeover of previous versions of the software and is designed for a new generation of touch-screen tablet computers and laptops. With the unveiling of their latest operating system, Microsoft also introduced us to their new tablet- Surface.

Microsoft developed the own-brand Surface tablet not only to compete against Apple’s iPad and push its Windows 8 operating system onto the market, but also to create a reference design for other hardware manufacturers to follow. Microsoft’s Surface represents much more than merely a tablet to the company that carefully crafted this huge device.

It is the flagship device of the Windows 8 operating system – it represents the company’s belated move to a touch interface and apps, and, most importantly, it represents the computer giant’s decision to turn its back on decades of close partnerships in order to manufacture its first ever PC.

The Surface weighs in at 1.5 pounds or 0.68 kg, which absolutely sits it in the portable category. Surface feel like a solid and well-built device. In fact, everything about the build quality of the Surface shouts about quality – the bevelled edges, the decision to go for more angles and less curve and the robust feeling physical keys included. Running Windows RT,  a specially modified version of the new Windows 8 platform, designed to run on devices sporting ARM processors, and you’ll be able to pick up the base 32GB model from £399.

The next step for Microsoft is convincing the world that Windows 8 is a comparable tablet OS to iOS and Android. However the first move was a good one – giving choice, an excellent array of hardware and a well-designed tablet range to those that are still unsure whether the current crop of slates can match their needs. It also sends a message to Microsoft’s hardware partners: this is the standard for Windows 8 tablets should adhere to, unless you’re going to get seriously competitive on price.

With early reviewers stating that the lack of available apps for Windows 8 is a detriment to this great piece of hardware, companies and individuals are rushing to develop their own Windows compatible apps worldwide Please feel free to contact us and we’ll help you learn how to take advantage of the recent Windows 8 release and enhance your existing business through this new platform.