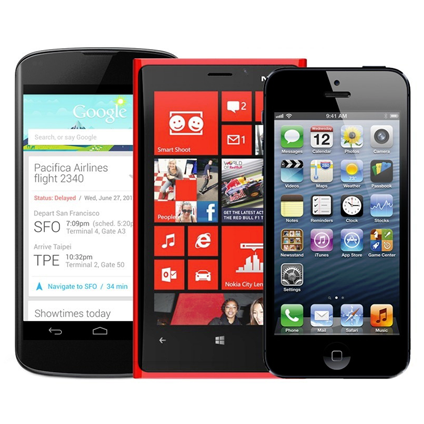 Mobile phone history has been made: For the first time, smartphones have outsold feature phones! According to recent statistics 418.6 million mobile phones were shipped in Q1 2013, including 216.2 million smartphones — more than half of the total market.

Smartphone growth rose more than 41 percent in the first quarter, but fell about 5 percent from the last three months of 2012. “The days where phones are used primarily to make phone calls and send text messages are quickly fading away,” said Kevin Restivo, senior research analyst with IDC, in a statement. “As a result, the balance of smartphone power has shifted to phone makers that are most dependent on smartphones.”

At the head of the market was Samsung, which shipped 70.7 million devices during the quarter, up 60.7% on 2012. It accounts for 32.7% of the smartphone market. Apple was second and shipped a first quarter high of 37.4 million units. Despite the record, last quarter marked the first time the manufacturer had single digit growth (6.6%) in almost four years. It holds a 17.3% market share.

Smartphone demand is burgeoning in large, populous nations such as Brazil, China or India with their respective economies growing rapidly; this has made for a larger middle class that is prepared to buy smartphones, which largely contributed to dominant position of smartphones in the current market. China, which supplanted the U.S. last year as the global leader in smartphone shipments, is at the forefront of this shift which will most likely continue to express the shift in consumer mobile needs worldwide.