iOS 8 is the eighth major release of the iOS mobile operating system designed by Apple Inc. as the successor to iOS 7. It was announced at the company’s Worldwide Developers Conference (WWDC) 2014 on June 2, 2014, and was released on September 17, 2014.

WWDC 2015 was the 26th edition of the annual developer meet, and this time around Apple boasted of attendees being from 70 countries with 80% of them being first-time attendees.While that stat might tell of Apple’s growing reach in developer circles, the company reported that its App Store has crossed 100 billion app downloads, with $30 billion being paid out to developers so far.

In terms of adoption of its latest software, Apple claims 55% of all Mac users are running on OS X Yosemite and iOS 8 is sitting at 83% adoption rate, which is actually lower than what iOS 7’s adoption rate was. They did indeed compare it to Android’s latest version which is Lollipop. Luckily, Apple didn’t throw the numbers too far out there, and did combine 5.0 along with 5.1. which is about 12.4%.

So why does Apple have such a higher adoption rate than Android?
For one, Apple makes all their hardware. Making it easier to create software for their iOS devices. Google doesn’t make all their hardware. They have tons of partners who all make all kinds of devices with different hardware, and different software on top of Android. Which makes rolling out updates even tougher to do for Google. It’s long been an issue for the search giant, and they’ve tried many times to fix the word, fragmentation. Updates have gotten better, but not by much. 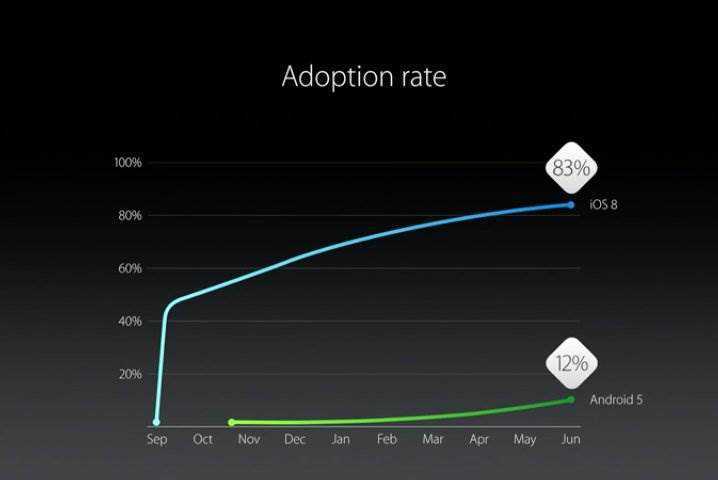